Remember the time when we would proudly say that Pakistani dramas are the best in the world? Most of the dramas today are centered around Indian gifted topics of SAAS BAHU quarrels. Well, this list of best Pakistani dramas of all time will show you the better side of it. Or shall I say, these are the actual Pakistani dramas?

The recent hit of Mere Pas Tum Ho enticed me to look deeper into the drama industry of Pakistan. I found the topic quite appealing and realized that we have come a long way. Rarely do we see dramas with such appropriateness.

The list of best Pakistani dramas of all time

It is indeed going to be the toughest task to actually rate them as I go along. So, I decided to name the best Pakistani dramas of all time instead of giving them ratings. Will you excuse me for this?

I remember a scene from Ankahi that went viral a few days ago. A popular Indian movie copied this scene from Pakistani drama serial Ankahi.

The drama is about the struggles of a middle-class girl SANA, who despite being clumsy, knows and performs her responsibilities. Old is gold as they say. Tanhaiyan fits that quote perfectly. This could be rated as one of the best Pakistani dramas of all time. Particularly when it comes to family dramas. We don’t have many family shows these days, do we? I mean the stories today are to break the families apart. This one, however, was a special family drama serial with an impeccable story. If you’re a doctor, you’ll love this drama. If you’re not, you’ll like it even more. The drama revolved around the lives of medical professionals. That too in a very practical manner. Doctors today could learn a thing or two from the story. One of the best Pakistani dramas of all time. Feudal mindset, in particular, when a girl leaves her village to get higher education. It was, by all means, an eye-opener for the viewers. Think what would be the content of a drama, today, if it was about a stepmother and her stepchildren? You’re right. It would memic world war 3. Aanch is a story of the same. Just written and directed rather rationally. One of the best Pakistani dramas of all time. 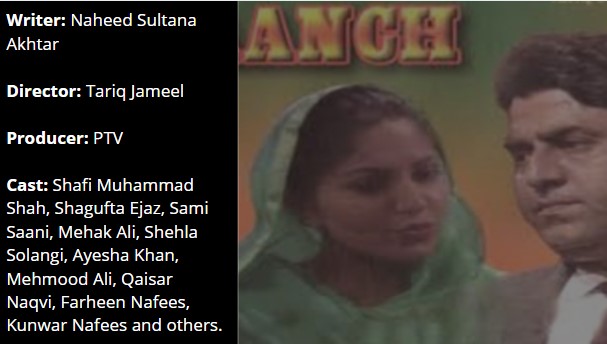 ISPR’s first production of a drama serial. It was about some friends in army. The drama does not require any depositions to be placed among the best Pakistani drams. The story was cordial and the people loved it. They still do. The story is about a girl who faces accusations against her character. Her husband had to choose between her and his family. Shall I spoil all the fun? No, I won’t. Go! find the drama and watch it yourself. Thank me later. Life is full of bloom and boon as the title describes “Zindagi Gulzar hai”. It’s a novel based drama written by our very owned Umera Ahmed The story is all about gender biases and different socio-economic classes and hardships of a middle-class girl Kashaf who earns a reputed position with her hard work. Along with the many twists and turns a beautiful love story of two people, opposite in thoughts and class starts and eventually ends up on marrying each other. Someone once said True love always finds a way and this story makes you believe in that.

Humsafar is you can say a revival of drama industry It’s a real masterpiece to watch which received overwhelmingly positive response and gained immense popularity and large audience internationally.

Humsafar is based on Urdu romantic novel written by Farhat Ishtiaq. The story revolves around the two main protagonists Ashar and Khirad and the trials and problems of a married couple. The story seemed to be a very simple and ideal love story in the start but the sudden change in the middle of the series did all the wonders and make this the most-watched drama in Pakistan.

With Strong story and content, Khuda Aur Muhabbat is the unique and classic story that revolves around love, Religion, Tradition, society, values, and beliefs in life. A story of a rich modern boy who falls in love with a middle-class girl and goes against his family and left all his wealth, comforts, family & luxurious life in order to pursue his love.

I must say Khuda Aur Mohabbat is the ruler coaster of Emotion, love, and hardships with amazing dialogues and meaningful conversations.

Females’ stories are dominant in the drama industry, isn’t it true? But Pyary Afzal is all about a young carefree man who is in love with a woman, but can’t express it later caught up with the wrong people and becomes an infamous gangster.

This drama personally has a great influence in my life as I learned a lesson that the most important thing in life is the love you give to and get from others is priceless, wealth and status are nothing in front of that love.

When it comes to script and dialogue no one can beat Khalil ur Rehman Qamar and that makes Pyary afzal a Hit.

Yes, Pyary Afzal’s last episode was screened in cinemas across Pakistan and comes first in the list of TV serials to hit the big screen

Sang-e-Mar Mar is a story of honor killing and Vanni – (using your daughter or sister to wash off your sins) This drama is full of deep and dark secrets of the stereotypical  Pakhtun’s culture who still thinks honor killing is an honorable act.

Udaari is the thought-provoking drama of child abuse and extramarital affair which raises some very important and real issues of society.

We all heard these lines “what goes around comes around” this is what this drama is all about with social evils that prevail in our society.

A worth watching serial with the story of a rich and fraudulent businessman who uses his power to trap young girls for his pleasure and manipulate them.

Cheekh is basically a crime thriller drama with a pretty sound script. A story of trials and tribulations of a woman Mannat who fights for justice on the brutal killing of her close friend and How she raised her voice against her family and go against his brother in law a who was a  ruthless cold-blooded psychopath murderer and rapist and knows how to manipulate any situation.

Ishaq Zahe Naseeb is a mystery drama that comes with a totally different concept of a split personality disorder where a person experiences two or more personalities and that character is brilliantly played by Zahid Ahmed.

References: All thanks to Google and WikiPedia for storing vital information, credible resources have been used from these two portals.

What happened to these three tourists in Gilgit Baltistan? You’ll be shocked

Get free how-to tutorials and over 700+ courses. Seo tips, create a wordpress, or learn a new skill.
[mc4wp_form]